Chemnitz, June 27, 2018— The TÜV SÜD Innovation Prize has been awarded for the second time, recognizing the successful cooperation of small and medium-sized enterprises with a research institution. The 1st place in the TÜV SÜD Innovation Prize in 2018: 3D-Micromac AG (Chemnitz) and Fraunhofer Institute for Microstructure of Materials and Systems (IMWS). The prize dignifies the successful development of a sample preparation system for microstructure diagnostics and failure diagnostics. The jury praised this innovative idea for its time savings, cost reduction and greater precision. The 2nd place goes to Simi Reality Motion Systems GmbH and the Institute Informationsverarbeitung of Leibniz-University Hanover; 3rd place goes to MdynamiX AG and Labor für Akustik & Dynamik Munich university. The prize provides the winners with a total of 50,000 euros.

“The three winners are a perfect example for successful and innovative cooperation of small and medium-sized enterprises and research institutions. This is what the TÜV SÜD Innovation Prize stands for. Congratulation to all winners and best of success for future developments.” says Prof. Dr.-Ing. Axel Stepken, Chairman of the board TÜV SÜD AG. The TÜV SÜD Innovation Prize was initialized in celebration of the 150th TÜV SÜD anniversary and awarded for the first time in 2107. The main focus lies on the support of small and medium-sized enterprises that have worked with a research institution to jointly develop and successfully launch a product or service. 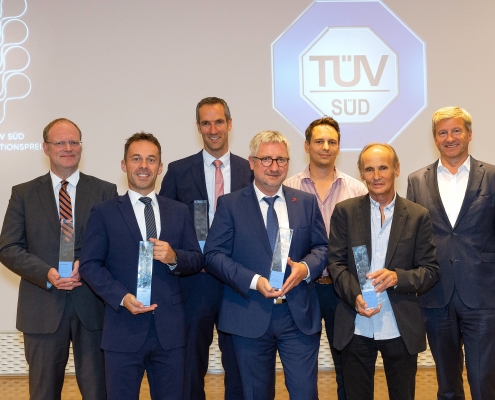 Built on a highly flexible platform with a small table-top footprint, the microPREP PRO allows for easy integration into FA workflows. Developed jointly with Fraunhofer Institute for Microstructure of Materials and Systems (IMWS), the microPREP PRO complements existing approaches to sample preparation such as focused ion beam (FIB) micromachining, offering up to 10,000 times higher ablation rates and therefore an order of magnitude lower cost of ownership (CoO) compared to FIB. As the first stand-alone, ultrashort pulsed laser-based tool for sample preparation, the microPREP PRO brings additional unique capabilities, such as enabling large-area and 3D-shape sampling to allow for more comprehensive testing of complex structures.

“The TÜV SÜD Innovation Prize is a great honor for us, because the microPREP falls outside our standard user market. The close cooperation with our partners from the Fraunhofer Institute is what made this development possible, since they are familiar with the market requirements for sample preparation. We contributed our many years of expertise in laser micromachining. As a result, we both created the basis for the microPREP™ and are continuously expanding its potential applications. This month we will be introducing a new device and new workflows at the Semicon West trade fair,” says Uwe Wagner, the Chief Technology Officer of 3D-Micromac.